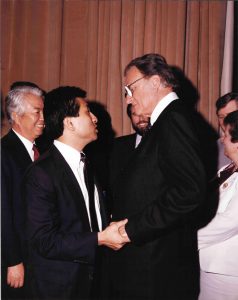 Rev. Billy Graham left this world to be with the Lord at 99 today, Feb. 21, 2017.  Back in June 1972, I can recall Graham’s visit to South Korea for a five-day revival. Three million people gathered at Yeoido Square to hear the preaching. I met Graham at the National Breakfast Prayer Meeting in Washington, DC, which held every January. I was invited to assist in operating the National Breakfast Prayer meeting when I was Congressional Assistant to the U.S. Speaker of House of Representatives from 1982 to 1991. Graham and U.S. President were present every year for the Prayer meeting. I was more excited to meet with Graham than President Ronald Reagan. Rev. Graham was a spiritual advisor to all nine U.S. Presidents, including Truman, Eisenhower, Kennedy, Johnson, Nixon, Carter, Reagan, Clinton, and Obama. More than 3.2 million people have accepted Jesus as their personal Savior in the “Billy Graham Crusades” rally, and about 215 million people, more than 185 countries heard his sermons in person. Total 2.2 billion people heard Graham’s sermons, including radio and TV broadcasts. Unlike other preachers for the last 70 years, Rev. Graham has never been blamed any scandal involving with money or sex. Thank you for the giant spiritual legacy you left behind.